When we talk about Apulian majolica, we tell a story of tradition, quality and craftsmanship. A story that in Oilalà is linked with another equally precious and millenary Apulian tradition: extra virgin olive oil Coratina and Peranzana.

Apulian majolica is the queen of glazed ceramics, with a very long and precious tradition.

In fact, in the sixteenth century it was believed that Majolica, thanks to its brightness, resistance and beauty, was the most suitable material to shine at the highest possible point that man could reach, the dome: the most appreciated example among the structures of architecture since between man and the divine. 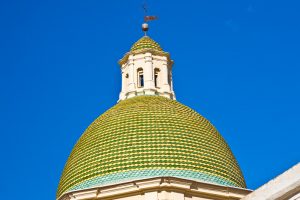 1)But, where did the Majolica come from?

Some archaeological excavations conducted in Grottaglie, an Apulian city near Taranto, have returned fragments of vases and tools for working ceramics that testify to a production history dating back to the Paleolithic. However, the official initial stage of the history of majolica dates back to 1300, a period in which it was already possible to notice splendid decorations in purple or green.

Since the sixteenth century, the art of working with majolica has been handed down from generation to generation by ceramist families, while the numerous religious orders that settled in the Apulian city produced works of particular value such as holy water stoups and tile floors painted with vegetable or geometric motifs.Throughout the nineteenth century Grottaglie was the largest production centre in the Land of Otranto of tableware such as plates, pans and jugs, but also pantry containers for oil and wine such as “capasoni” and “capase”.

Even today, the “Quartiere delle ceramiche” of Grottaglie is a triumph of artisan production workshops, small shops dug into the limestone rock that still preserve the ancient cooking kilns. Very often located in ancient underground olive oil mills used for clay processing, they enchant tourists from all over the world. 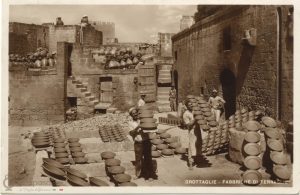 Majolica has its roots, in the sense in which we understand it today, between the 10th and 11th centuries when the production of decorated, glazed, coloured and waterproof ceramics began to intensify in Europe. Its diffusion reaches its peak in the fifteenth century, when production of Spanish origin dictated the law, in particular in the cities of Valencia, Granada, Barcelona and in some places in Andalusia and of course Mallorca which became one of the most active production centres.

2)The process of creating a Majolica

According to tradition, the creation of Majolica requires a precise figure for each stage of processing: the “palazziere” prepares the clay or “palace” by hand; the “stompa creta” prepares the dough; the “faenzaru” deals with shaping the clay on the lathe; the “caminaru” follows cooking in the furnace.

The raw material that gives life to majolica is in fact clay, a natural compound that forms spontaneously from the erosion of rocks by atmospheric agents.The transformation of clay into glazed ceramic is an ancient art: a long and patient process that transforms raw clay into an elastic and malleable compound. 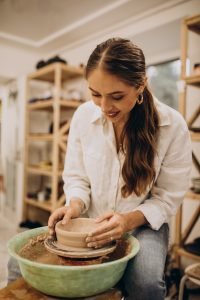 Once the mixture is obtained, the next step is the modelling. Raw clay can be modelled with a lathe, by hand or by dividing it into plates.The lathe is a rotating disk on which the craftsman places a shapeless mass of clay and makes the model rotate quickly with his hands.Finally, freehand clay modelling is the oldest method of processing and consists of using the hands to create a three-dimensional shape such as a pupa, a knight or a hedgehog. To define the details, the craftsman then uses wooden sticks and iron gouges.

The newly modelled objects must dry slowly in the open air to lose internal humidity. After a few days they take on a hard and compact consistency, the stage known as ‘leather hardness’.

The firing of raw clay objects takes place in large ovens that reach very high temperatures. The result is a rusty red object: known as “biscuit” or “terracotta”.

The enamelling can be by immersion or by airbrush.In the first, the biscuit is immersed in a liquid solution, the enamel, with the help of metal tongs.In airbrush enamelling, on the other hand, the liquid enamel is sprayed onto the object by means of an airbrush, an aluminium or steel device equipped with a tank to contain the liquid to be sprayed.This apparently simple operation instead requires a lot of skill on the part of the craftsman who must absorb the right amount of enamel on the entire surface of the object.

Here we are at the stage that interests and excites us most: decoration.This is the moment when the true essence of majolica is released. In this phase, the craftsman expresses all the passion, dedication and creative abilities he possesses. Surrounded by brushes and special ceramic colours of all kinds, he decorates the surface of the glazed ceramic with different and original textures and shades each time. He draws flowers, leaves, animals and landscapes. He uses different types of brushes to spread the colours in various ways and thus give the majolica a unique and unrepeatable look.

Last stage of the creative process. After the glazing and decoration, the craftsman proceeds to the second firing of the object to fix the colours and make it waterproof like glass.

Here for you our proposal: Extra Virgin Olive Oil Majolica

3)The magic of majolica colours

At first glance they convey joy and well-being.The harmony between the bright colours, the pleasant contrast between curves and sharp lines, captures the eye and gives a smile.Imagine walking through the streets of the historic center of Grottaglie, or Polignano or Ostuni, in Apulia, and seeing yourself immersed in an explosion of colored and precious majolica.

Each majolica then has its own intrinsic meaning. 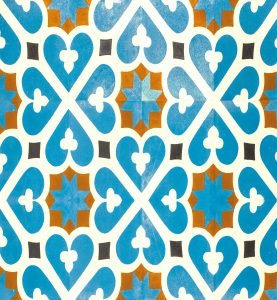 Blue Majolica, for example, is associated with the sky and the sea and represents the metaphysical sky-father. The key word for blue is purification, that is, the ability to separate what is poisonous, harmful from what is not. By staring at this colour for a long time, an effect of tranquillity, satisfaction and harmony is produced. 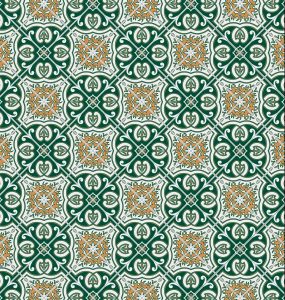 Green Majolica, on the other hand, takes on a very positive meaning here in the West. It is often used to represent abundance and luck in the general sense of the term. Its symbolism refers to total balance, made of harmony and love.

One of the first images that probably crosses our mind when we think of green is a beautiful lawn. It is in fact the colour of nature during the warm seasons, it refers with the mind to the natural kingdom and all its wonderful laws. 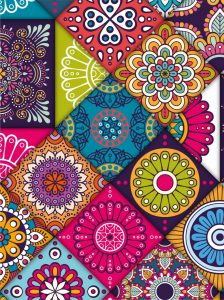 Majolica is sovereign in shades of fuchsia and purple. Purple red immediately calls for luxury and wealth. It recalls the colour of blood and therefore the life force, but also the sacrifice: it symbolizes purification and regeneration at the same time.

Purple has always been a colour associated with power. In ancient Rome, the senators wore toga with a purple border and the emperor’s robe also had embroidery of this colour. In the ancient world, purple was considered a rare and valuable dye since it was obtained only after very long and expensive procedures (not surprisingly it was the colour worn by the nobles to distinguish themselves from the plebs).

Whether it is majolica or olive oil, what leads to the creation of a marvel is the passion and expertise of the craftsman who, in full respect of the raw material he models, creates his masterpiece with patience and dedication. In fact, it is no coincidence that many of the artisan workshops in which this glazed ceramic is worked are former underground olive oil mills, places reminiscent of tradition and history.

5)Why is it so important to us?

We at Oilalà have decided to celebrate, with our creations, the precious link between our Apulian olive oil and the tradition and history of the majolica of our land.The elegance of the sinuous patterns with which the tiles are decorated blend well with the refined design of our bottles. The result is an elegant and lively bottle, perfect for collecting and gifting. It is in fact an ideal idea to give olive oil as a gift or to embellish your kitchen.

Festive majolica with yellow, brown and blue painted decorations reigned in the most elegant residences of the Apulian bourgeoisie of the past, such as palaces and farms.And you know, the past is the best guarantee of the future. Where a great tradition exists and resists, there are the deep roots of a future that feeds on its past to perfect it and pay homage to it.

This is why we at Oilalà have decided to celebrate the history and beauty of Apulian Majolica with a series of wonderful stain-resistant labels inspired by the great masters of the seventeenth century and the most representative places of Puglia.A tribute to our beloved land and to everything it represents in the world with its infinite baggage of Culture, Beauty and Tradition.

Immerse yourself in this journey full of colours and scents. Enjoy one of the best extra virgin olive oils in the world.

The “Capela de almas” located in Porto, Portugal, is completely covered with majolica in shades of blue and white: 15,947 tiles covering approximately 360 square meters of wall. The tiles that cover the chapel were designed in 1929 by Eduardo Leite and represent the stages in the life of São Francisco de Assis and Santa Catarina, which are venerated in the chapel. 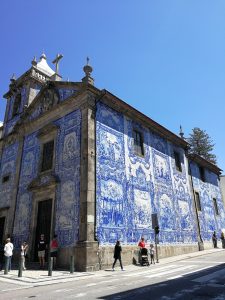 Here for you our proposal: Extra Virgin Olive Oil Majolica

Categorized: Blog Oilalà
Previous postThe best Italian extra virgin olive oil in the world? Coratina olive oil from Oilalà [updated to Jan. 2021]Next postOilalà says no to glyphosate! Risks and damage of the most widespread herbicide in the world